This Smallholding Life – an extract 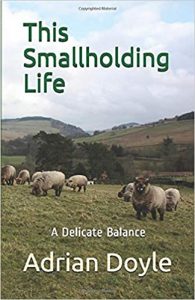 We had just moved into our new place in south-west Scotland and were still sorting out boxes. We had bought three ewes in lamb so we would not miss out on lambing. We were up at nights checking on them. To say we were busy would be an understatement.

Let’s get pigs, we thought. As if we didn’t already have enough to do. The problem was, I had visited a farm that kept pigs to see how it was done and it just looked so easy.

We had a pig arc and an electric fence, so we were all set. We found some weaners from a local supplier and ordered two.

We prepared the pig arc and set up the electric fence just as I had been shown. Then we set off to collect our weaners. This is where we made our first mistake. We have often transported lambs in the back of the car. Surely that would be fine for weaners. No! We should have taken a dog crate or something similar. The weaners were all over the place, climbing over everything and getting everywhere. In the end, Nicole had to sit in the back with them and keep them out of trouble.

So, we got them back and introduced them to their new home. It was a pleasant day, and their area was covered in fresh grass and flowers. The pig arc was full of fresh straw. They’ll be delighted, we thought. We set them down next to the arc entrance and stepped back to watch. We named them Ant and Dec as we couldn’t tell them apart.

They went off exploring. We saw them touch the electric fence and then move quickly back. It all looked to be working fine. After a while and given that we had rather a lot to do, we left them to it. We checked in every half hour or so, and it all looked good. And then, it went quiet. I nipped over to look. It was eerily quiet. I searched the run, but they had gone! I looked up and just caught sight of a tail disappearing through a stock fence into next door’s garden. I yelled for help.

Nicole arrived quickly and caught the first escapee. Nicole handed her to me and set off after number two. I wasn’t entirely sure what to do with escapee number one. I knew if I just returned her to the run, she’d likely escape again. In the end, I found some wood, put her in the pig arc and blocked the entrance.

By now Nicole and weaner number two (Ant or Dec) had vanished. I didn’t even know which direction to go so that I could help. As I started wandering around looking for them, Nicole arrived looking totally dishevelled with a squealing weaner clutched to her chest. She had been over barbed wire fences, through brambles and bushes and finally, luckily, cornered Ant or Dec in another field and caught her.

We put her in the pig arc and had a conference. We had another pig arc door, so I fastened that on so we could keep them in overnight. We then decided to build a small run around the pig arc that was weaner proof. Together, we constructed a fence of chicken wire and put a strip of barbed wire along the bottom to stop them lifting it up.